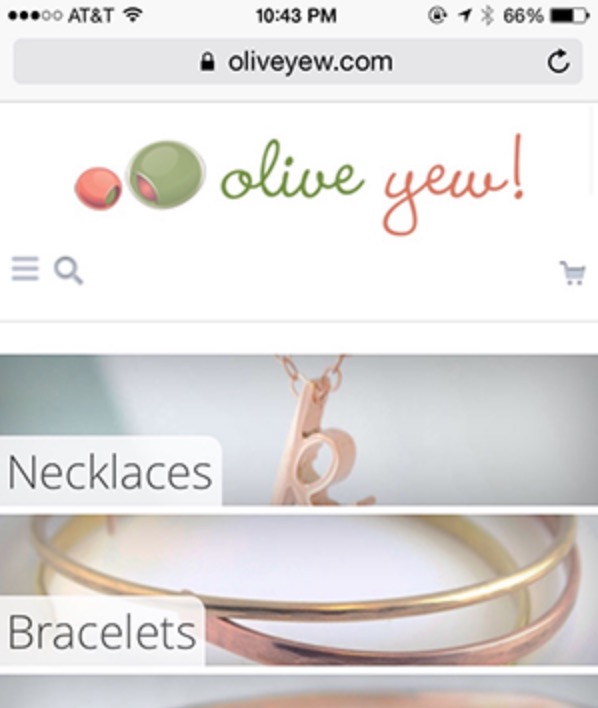 Jewelry that fits in the palm of your hand

When I got to working on oliveyew.com, it was in a less-than-ideal place for a commerce site — hosted on WordPress and tied to a heavily-edited theme that was no longer in development which itself was temperamentally tied to a commerce plugin that happily acted temperamental all on its own without anyone’s help.

The upshot of all of that is, that if we were going to have a mobile site without just scrapping everything and going to Shopify or something, it would involve effectively coding a separate mobile theme inside that existing theme and making sure not only that it worked on its own with all this temperamental code swirling around it, but also didn’t break or fudge up anything on the desktop site.

It worked out fine, insofar that nothing broke. But if you’ve ever written code and aspired to write code that’s as cleanly organized on the inside as the final product is on the outside, and then sat demoralized at the mess made by thousands of non-linear lines crashing awkwardly into each other, the mess made here would have inspired something ranging from solidarity to pity to schadenfreude.

Two years later, that version of the site is now gone, replaced by that Shopify idea I recommended against my own selfish interests. It’s a bittersweet change — good insofar that the inevitable breakdown between all those parts never materialized, but sobering for the reminder that Squarespace and Shopify robots will eventually destroy my livelihood and force me to get my old job back at the grocery store. Except that more and more grocery stores use self-checkout now, so maybe I’ll just go live in the woods.