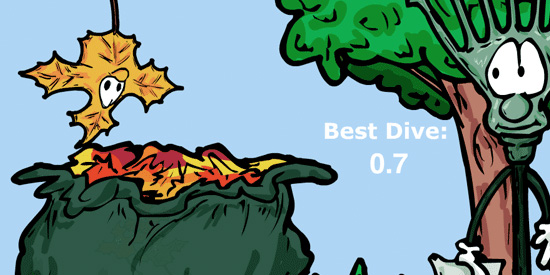 In redesigning the animation section, I discovered that it had been more than two years since I’d bothered to actually add anything here. What’s with that? Who knows. I’m sure I have some new stuff I can shovel on here.

In the meantime, though, here’s something old that I’ve packaged as new. This leaf dive can be found in the animated greetings section, but it pops up only during the fall and is sorta buried anyway, unless more people than I assume send out e-greetings proclaiming their excitement over fall arriving. So here it is again. Improvements over the greeting version include larger size, faster framerate (for greater challenge), some art touchups and more amazing special effects than ever (the leaves actually appear to be diving IN the bag instead of behind it).

Posted in Animation/Etc. Bookmark the permalink.