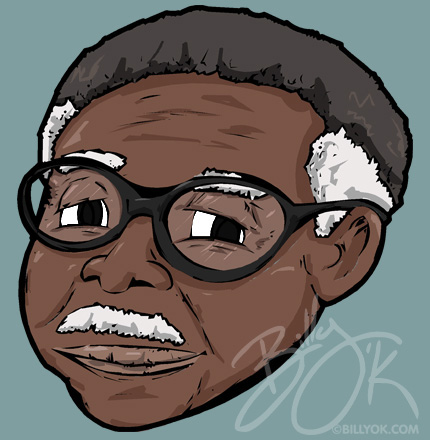 Anyway, the cartoon you see here is an example of that. That’s not the head of some ordinary schmo, but rather one of the best teachers I ever had in my (too) many years of schooling. His name is Les Brownlee, he’s 86 years old (allegedly; he claims he’s 35), and he can run circles around people a fifth his age (approximately seven years old, according to his fuzzy math).

In addition to all that, Les is a bit of a legend in Chicago journalism — the city’s first black television journalist, for one thing, but that’s not his only claim. As you might recall, I went to college to study journalism, not cartooning, so it’s pretty clear why I look up to the guy. We developed a strong mutual respect in the two classes I had with him, and we’re not done working together, either.

So anyway, long story short: The Chicago journalism chapter (for which I’ve done a bunch of work over the years) brought me on in October 2002 to design pretty much everything for a series of journalism events in Les’ honor. Like I said, a perfect fit, and despite the logistical nightmare that ensued (and ensued again this past October, and will probably ensure again next October) it’s probably the most fulfilling assignment I’ve had on many levels.

In case it isn’t obvious, that’s Les above. The shape eventually became part of the logo, but I didn’t actually use the full cartoon for anything, since it didn’t fit the theme of the final design (and never intended to, really). I intend, next year, to hit up the Chicago chapter with the idea of putting the cartoon on a shirt, since people would eat it up (the logo itself was a massive hit). Until then, it sits here, because whether you know it or not, it looks a whole heck of a lot like Les, particularly when he’s getting ready to lay a clever opening line on some unsuspecting woman, which he does quite often and with the tongue-in-cheek blessing of his wife.