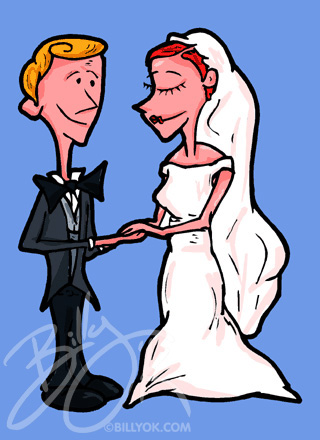 “I now pronounce you bored” Despite a lack of interest in the subject at the moment, I’ve been in charge of designing, I think, five wedding-themed special sections at Tribune. The clients typically favor a traditional look, with flowery this and that and a poignant picture of a bride on the cover.

But that gets a little boring the third or fourth time around, so I decided to try out this cartoon on the cover instead, with a more playful design on the inside to complement it. It went over so incredibly well that I was asked to redesign the same section all over again from scratch. That’s the risk you take sometimes.

The style was popular with my editors, but their hands were tied. As a compromise, the cartoon made it into the section in a more reduced role. And fear not, for I was able to find yet another syrupy photo of a bride for the cover. As usual, she looked bored. They always look bored in stock photos. Even sad sometimes. I’ve never laid out a cover in which the bride actually looked happy to be there. Probably because weddings aren’t all that much fun until the cake arrives, which takes way too long to happen.