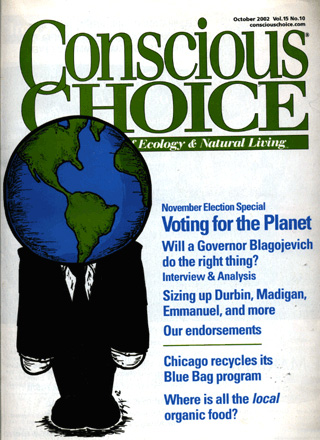 Yes, I really do get published — yes, really I last updated the cartoon portfolio on May 27, which is just a ridiculously long amount of time when you want someone other than your family to visit more than once. So that’ll change and from here on out, I’m updating this page every day. Or every other day. Or once a week. Maybe.

In any case, I was going to storm back to form in a dramatic way with a picture of a middle-aged woodchuck when I realized that, for some staggering reason, I haven’t posted this cartoon, one of my all-time favorites and proof beyond a shadow of a doubt that someone out there visited this site on purpose.

In case you haven’t heard of the magazine, Conscious Choice is a magazine about living mindfully, taking care of yourself and your environment and basically avoiding such activities as eating a McRib out of a Styrofoam box and throwing said box in a pond, where it will entrap a baby duck or a small child. It’s intelligently written and easy for anyone to digest. So basically, I like it a lot, even though it can be hard to find sometimes (I only have one copy of the issue with my own cartoon on it).

Anyway, long story that’s only interesting to me short, the editor of the magazine was tipped off by one of the staff members, who met me during an event at Columbia College. She visited the site, saw the ball head cartoon that was worth a B-minus in my only drawing class at Columbia (scroll down or search the archives for “Ball head people” for the full story and cartoon), and asked me to turn it into something she could put in the magazine. The whole process went as smoothly as I just described it. The only unpleasant surprise was the cartoon’s unexpected ascension to the cover, and that news was only unpleasant to people who don’t like me. Assuming there exists a person in this world who doesn’t like me, which is just completely preposterous, I know.