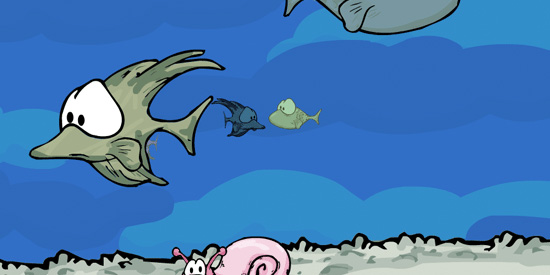 When I was younger and playing around with an Apple IIc, I made an animated aquarium in the program called — get this — “Animate.” It wasn’t particularly great, but hey, it wasn’t terrible, at least. I decided to really bring it to life with this, and while it’s nothing super-spectacular, I’m very happy with it, and that’s all that really counts, since I’m a self-absorbed narcissist. The beauty in this thing lies in using Flash’s scripting abilities to randomly change the color of the fish, water and gravel so that you never get the same thing twice — unless, of course, you dedicate your life to resetting this aquarium until you DO get the same thing twice. If that descibes you, write me a letter and let me know how it’s going.

Oh, and the “ambient sound?” That’s just me blowing into a microphone. Another illusion ruined.