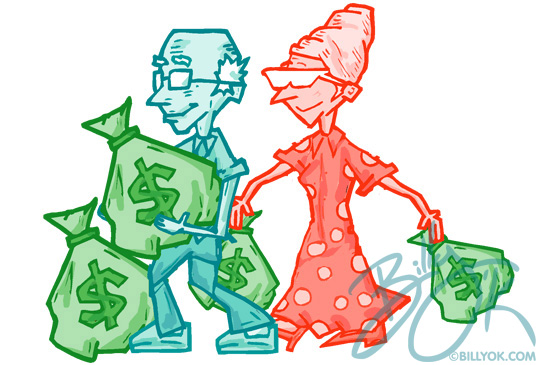 A few months back, my bosses at TMS gave me the green light to add my own art to some of the sections I produce. And if you don’t take advantage of an offer to put yourself into some 70 newspapers, you’re not very smart. For a special retirement section, I decided to go more nuts than usual and basically create a theme with my own work.

To justify this total blast of self-indulgence, I created a series of characters that would gel with the theme on each page (staying active, love, managing money and so on). And for some reason, I decided to make them all pointy and angular, as well as one-colored, as you can see. Beats me why, but everyone liked it and I looked brilliant for basically promoting myself. Perhaps I am brilliant then. Who knows?

Hmm, I actually have nothing left to say about these angular retired people, except that I have two more drawings of them I haven’t shown in this month’s portfolio. So you may see more of them in the future. Which is great, since I’ve already run out of things to say about them.

I don’t necessarily get the excitement myself, which is a bit of a drag since I created them, but whatever. I’m not one to rail against public opinion.

And here is the fifth and final Angular Retired People cartoon. This one is also the most controversial, since it depicts them playing, unsupervised, with an x-ray machine.